Ecological Assessment of the Plant Communities of the Williams Lake Backlands 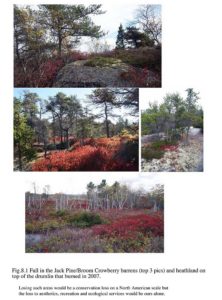 The WLB present a mosaic of landscapes and plant communities associated with high variability on a fairly small scale in the topography, depth of soil/till, drainage and surface water storage and in the ages since disturbance of the associated plant communities. That variability in turn is related to the presence of glacially scoured hard granite outcrops of South Mountain Batholith, outcroppings of highly folded and metamorphosed Halifax Group black slates and siltstones of the Meguma Supergroup, a contact zone between the two rock types, and glacial till. Overall, the plant communities are those of nutrient-poor, acidic environments and of fire-, wind-, and pest-driven disturbance regimes within a moist temperate, coastal region. Exotic (non-native) species are found only close to roads and houses at the edge of the WLB. These are “old process” plant communities with a high degree of ecological integrity.

The water regime in the WLB has features of dryland systems, with intermittent stream courses probably accounting for a majority of the water flow. Critical components such as Mountain Holly washes, vernal pools and boulder fields are not currently protected under Nova Scotia wetland and stream course regulations but are vital to maintenance of the larger wetlands and water quality of both surface and groundwater in the area.

The undisturbed nature of this wilderness area, its mosaic of habitats with wetlands, lakes, streams, forest and barrens, and its location by the coast in the most urbanized area of the province make the WLB and the larger Purcell’s Cove Backlands significant habitat for both breeding and migratory birds.

It is suggested that conserving the WLB and the larger Purcell’s Cove Backlands as natural systems reduces fire risk to adjacent communities compared to allowing more intrusions into the backlands. Implementing strategies such as those promoted in the northeastern U.S. for living compatibly with fire structured pitch pine ecosystems would enhance both fire protection for neighbouring communities and conservation of biodiversity in our backlands.